After collaborating on several other projects, Melbourne singer/songwriter Jess Porter has teamed up with multi-instrumentalists and homies Evan Lee (BLKLST) and Brycey to form Secret Lung.

The band's first single Phantom Limbs will be released Jan 25th and is for anyone who's ever been heartbroken by a jerk. Produced at The Loud Noise Estate by Evan Lee and Ash Daws, Phantom Limbs is cathartic, full of hooks and must be played loud. 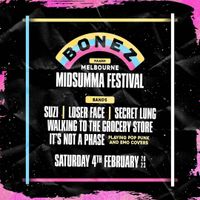